Staff member
thought this was an excellent tweet that has attracted some outstanding comments...

Staff member
this fella is spot on, let's hope that the rest of the free world gets on the same bandwagon

Global lawsuits against China for “patent breaches” of the International Health Regulations over its handling of COVID-19 could run to at least £3.2 trillion from just the nations of the G7, according to HJS' report.

The report claims that the Chinese government’s early handling of the disease and failure to adequately report information to the WHO breached Articles Six and Seven of the International Health Regulations [IHRs], a Treaty to which China is a signatory and legally obliged to uphold. These breaches allowed the outbreak to rapidly spread outside Wuhan, its place of origin.

Staff member
Is it any wonder that views of China have grown more negative in recent years across many advanced economies, and unfavorable opinion has soared over the past year, a new 14-country Pew Research Center survey shows. Today, a majority in each of the surveyed countries has an unfavorable opinion of China. And in Australia, the United Kingdom, Germany, the Netherlands, Sweden, the United States, South Korea, Spain and Canada, negative views have reached their highest points since the Center began polling on this topic more than a decade ago.

Staff member
the Chinese must be held accountable for the death and mayhem that they have inflicted on the world!

Staff member
make sure you watch this...

China is throwing more weight around Australia.
In WA the previous Barnett Government gave China a 99 year lease on the Ord River food growing bowl with no exit clause (I remember Barnett said they would have to look into it once a reporter pointed this out after reading through the document release). They also sold a few dairy properties to them as well.

The current WA government has sold a Kimberleys airport to the Chinese for $1 (there are probably other dealings but cannot think of them) and the Queensland government sold one of the island in the Whitsundays to Chinese developers, they closed down the airport and jetty so local house renters had to leave the island as there was no way for supplies to arrive or for them to get back and forth to the mainland.

The Chinese government is now donating to PNG and want to build a $100 million industrial fish processing plant on an island just outside the Australian waters boundary. An expert said there is not that many fish in that area.
There was no islands to develop near Japan so they built man made islands to put their military bases. Whose iron ore are they using to built the military facilities on these islands and also to increase the numbers of navy ships.

Staff member
I think this tweet is just one aspect of what the rest of the world is doing to strengthen their military position against China.

There is now significant military action being taken behind the scenes by all countries including Australia in preparation for war with China. 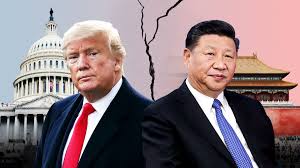 China says it will take necessary "counter-measures" in response to the New York Stock Exchange's move to delist three major Chinese telecoms, in the latest flare-up of tensions between Beijing and Washington.

The stock exchange announced on Thursday that it would delist China Telecom Corp, China Mobile and China Unicom Hong Kong, with trading of the companies to be suspended some time between January 7 and January 11.

The move stems from an executive order President Donald Trump issued on November 12, barring investment in publicly traded companies that the US Government says are owned or controlled by the Chinese military.

Staff member
this is great to see, about time the US got some real support!!